If we were to take $p$ as a proper fraction (less than unity), the curve would obviously tend to sink downwards, as in Figure 42, where each successive ordinate is $\frac{3}{4}$ of the height of the preceding one. 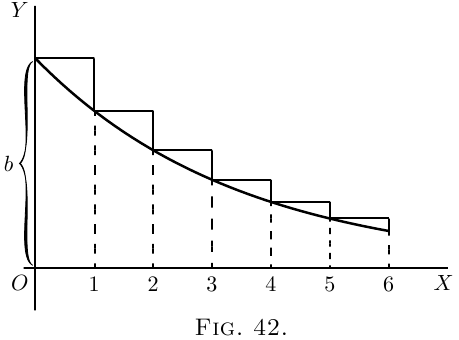 The importance of this expression is that, in the case where the independent variable is time, the equation represents the course of a great many physical processes in which something is gradually dying away. Thus, the cooling of a hot body is represented (in Newton's celebrated “law of cooling”) by the equation \[ \theta_t=\theta_0 \epsilon^{-at}; \] where $\theta_0$ is the original excess of temperature of a hot body over that of its surroundings, $\theta_t$ the excess of temperature at the end of time $t$, and $a$ is a constant–namely, the constant of decrement, depending on the amount of surface exposed by the body, and on its coefficients of conductivity and emissivity, etc.

A similar formula, \[ Q_t=Q_0 \epsilon^{-at}, \] is used to express the charge of an electrified body, originally having a charge $Q_0$, which is leaking away with a constant of decrement $a$; which constant depends in this case on the capacity of the body and on the resistance of the leakage-path.

Oscillations given to a flexible spring die out after a time; and the dying-out of the amplitude of the motion may be expressed in a similar way.

The values of $\epsilon^x$ and $\epsilon^{-x}$ are continually required in different branches of physics, and as they are given in very few sets of mathematical tables, some of the values are tabulated here for convenience.

(1) The strength of an electric current in a conductor at a time $t$ secs. after the application of the electromotive force producing it is given by the expression $C = \dfrac{E}{R}\left\{1 - \epsilon^{-\frac{Rt}{L}}\right\}$.

(2) The intensity $I$ of a beam of light which has passed through a thickness $l$ cm. of some transparent medium is $I = I_0\epsilon^{-Kl}$, where $I_0$ is the initial intensity of the beam and $K$ is a “constant of absorption.”

(3) The quantity $Q$ of a radio-active substance which has not yet undergone transformation is known to be related to the initial quantity $Q_0$ of the substance by the relation $Q = Q_0 \epsilon^{-\lambda t}$, where $\lambda$ is a constant and $t$ the time in seconds elapsed since the transformation began.

For “Radium $A$,” if time is expressed in seconds, experiment shows that $\lambda = 3.85 × 10^{-3}$. Find the time required for transforming half the substance. (This time is called the “mean life” of the substance.)

(2) If a hot body cools so that in $24$ minutes its excess of temperature has fallen to half the initial amount, deduce the time-constant, and find how long it will be in cooling down to $1$ per cent. of the original excess.